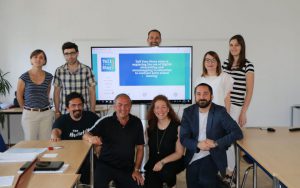 The second transnational meeting of the project Tell your story took place in Vienna on 14– 15 June 2017. The project consortium consisting of Pistes Solidaires (Project Coordinator, France), RIS Dvorec Rakičan (Slovenia), Rinova Limited (United Kingdom), EUROGEO VZW (Belgium) and CESIE (Italy) used the meeting to update each other on the project´s first results and reiterate the importance of storytelling in the fight against early school leaving.

Specifically, the scientific study “Telling digital stories to fight against early-school leaving” (which is our first project output) has been finalised. It summarizes the present state of research on the potential for story-telling and digital story mapping to engage young people at risk of drop out. It is available here.

Furthermore, the partnership carefully went through the next activities to be implemented, specifically regarding the development of the two learning modules (How to tell a life story & Media production skills).

Tell your story is a 2 years project co-financed by the Erasmus+ Programme, Key action 2 – Strategic Partnerships for adult education.

For further information on the project please visit tellyourstorymap.eu!

We inform you regularly on our ongoing EU projects, current Calls for Proposals of funding programmes, events with European themes and our offers in the areas EU funding support and project support: